Does bending hurt your back? Busting the most common back myths

In this article, James Raiher, back pain rehabilitation expert, explains why lifting objects correctly isn’t as complicated as it is often made out to be.

Your back is not as fragile as you think!

First of all, let’s get straight into the controversy. Your back is not as fragile as some people would have you believe. It’s true that our evolutionary transition from four legs to two isn’t quite complete, but we are also pretty well adapted for the lifting and carrying tasks we have to accomplish. An interrelated connection of muscles, ligaments, bones and nerves allows wonderfully complex coordinated movement. And after all, we have been upright for around 2 million years (if you’re interested in why we moved from four to two legs, it was probably to save energy).

But wait, I already know how to lift!

I am going to challenge a popular assumption about lifting and your back which causes much stress and worry. At some point or another – and probably frequently – we have all been told to squat down and “lift with the legs”. That’s what I was told too and new evidence suggests it’s absolutely wrong. 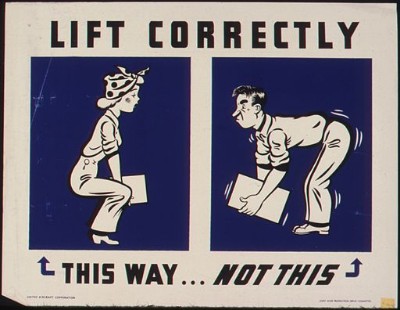 Is stooping not a very bad idea?

I will admit that it is almost impossible to believe that stooping over does not put more load on the spine, but it appears to be the case. In 2016, a fascinating study comparing squat lifting and stoop lifting found only 4% difference in load on the tissues, which is…. just about nothing. To go back to powerlifting briefly, a sport dominated by lifting while stooping, it’s been found to be extremely safe compared with many other sports and not a significant source of low back pain. Remember, don’t try powerlifting at home, these are trained professionals, but the principle remains that stooping isn’t in itself a bad thing.

So what about all that health and safety advice?

Lifting with the legs might have found its way into popular culture and health and safety manuals, but it dates from a time when healthcare advice was given based upon empirical observation rather than rigorous scientific study. Keeping the lumbar spine in a neutral non-flexed non-stooping posture does not seem to be protective, as shown in this study and others.

There is also a solid biomechanical reason why lifting with only the legs is actually impossible if the weight is too heavy. With the knees and hips both bent (maximally flexed, full crouch position), there is no momentum to initiate the lifting movement. You actually need a bit of lumbar movement to get it all started.

A groundbreaking paper in the British Medical Journal in 2008 concluded that ‘there is no evidence to support [the] use of advice or training in working techniques with or without lifting equipment to prevent back pain.’ It seems that we already know how to lift fairly heavy objects because we’ve been doing it for nearly 2 million years. We bend, we grab hold of the object, we straighten up again. Simple!

You will have noticed that I have repeatedly used the phrase ‘fairly heavy’ because lifting something that is very heavy does require strength and support, often from an external hoist (though not, apparently, from a lumbar support). There is increased pressure on all spinal structures and peripheral joints and muscles when lifting heavier objects and care must be taken. Furthermore, body types vary enormously so that one person’s heavy is another person’s light.

So is there a right way to lift a fairly heavy object?

The one take-home message I have for you, and the most important thing of all, is to keep the object you are lifting as close to your body as you can. It’s all to do with centre of gravity. An object held close to the body does not disrupt your ability to move as much as one held far from you, so it’s easier to lift and carry. It places less demand on your back because, as far as your back and thigh muscles are concerned, the object is part of you so your body can function normally even though it has to work a little harder.

Please note that these guidelines apply to most people most of the time. Specific guidance is required for specific cases, including specialist occupation lifting (such as carers, nurses or factory workers), nor bodybuilders, powerlifters, or people with specific injuries to the spine, nor those with motor nerve impairment syndromes. This also doesn’t apply to carrying a wriggling baby with one arm and the resulting tendonitis. If you find yourself in any of these categories, we are always happy to discuss further.

For more information contact one of our osteopaths today.